How to Make a Beaded Gecko Lizard Keychain 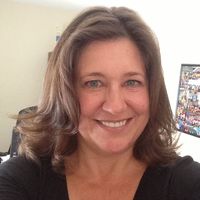 Lisa Yang
Lisa Yang is a professional jewelry maker and designer with over 30 years of hands-on experience in beadworking, wire wrapping, and other techniques. Lisa works with jewelry craft suppliers on new products, and her own creations have sold in select gift shops and specialty stores.
Learn more about The Spruce Crafts' Editorial Process

This beaded lizard is simple to make and requires no special beadwork skill or knowledge. It can be done by any age level and is a favorite for summer camp craft sessions, scout group crafts, back-to-school crafts, or any time you need to keep hands busy. To adapt this craft to different age levels, you can vary the type and size of beads you use.

Print out or open the beaded lizard pattern in a separate window and follow along with these step by step instructions.

Choosing Beads for a Beaded Lizard

The type of beads and type of string or cord you choose for your beaded lizard will determine the size and finished look—and also the suitable age group. Largely rounded beads, such as pony beads, work well for young crafters who are just getting familiar with stringing or get frustrated easily. They also work well for older crafters who have trouble seeing the small holes of other beads.

Perler beads, also called fuse beads, are a less traditional choice for this craft, but many camps, schools or parents have buckets full of them, so they are worth giving a try. They also come in the best assortment of colors. They are slightly smaller than pony beads with a shape that's similar to ​Japanese cylinder beads but on a much larger scale.

Another less traditional choice, but the one used for this example, is size 6 glass beads, also called E beads. They are smaller than the other two options and come in a wide variety of colors and sizes. These beads are a great inexpensive option and give more satisfaction for a slightly more experienced crafter—and may even make older children want to craft with their younger siblings.

For each beaded lizard, you will need at least one to two yards of bead cord. The cord must easily fit through the bead twice. One yard of the cord is suitable if you are using small beads. More cord is required with larger Pony beads.

In addition, you will need small amounts (less than thirty) of two colors of beads and two more beads of a different color for the lizard eyes.

Start Stringing Beads in the Middle

Unlike most projects, the beaded lizard begins in the middle of the thread or cord. Pick up one bead and slide it to the center, so you have two equal lengths of cord on either side.

Put Both Cord Ends Through the Beads

Pick up the first two beads of the second row on one side of the thread. Keep them toward the thread end.

Add the Second Row of Bead

Pull the thread ends to slide the two beads to the center. They should stack neatly on the first bead. Make sure your beads remain centered by comparing the tail lengths and adjust as necessary.

Adding the rest of the rows of beads for the body and tail are done the same way. Making the lizard legs is slightly different.

You will use the cord from each side to make each of the lizard legs. The right cord will make the right leg, the left cord will be used to make the left leg. Pick up two beads of the first color and three beads of the second color for each leg.

Skipping the last three beads, put your cord back through the two beads. Make sure you pull the bead tight and slide the beads close to the body. Arrange the three beads that make up the foot into a triangle.

Continue the body of the lizard the same way you started in the beginning, by picking up the correct number of beads and placing the cord from the other side through the beads in the opposite direction.

Repeat the instructions above for the back legs of the lizard.

Add a Tail and Knot the Thread

Add one bead at a time to make the lizard tail. When you are done, you can knot your threads using either a square knot or an overhand knot. We recommend an overhand knot because we think it stays tight better.

Slide the Overhand Knot Close to the Beads

To slide an overhand knot close to the beads, insert a piece of wire or another pointy object into the knot to help slide it into place. This will keep the knot slightly unfastened so you can manipulate it into place before removing the wire and tightening the knot for good.

Add a Keyring to Finish

Add a keyring between the two cords and tie another square or overhand knot to secure it in place. We used a large jump ring to hold the key, held in place by another overhand knot. Add your key and you are ready to go.

There are many other bead critters that can be made using this same technique. Search for pony bead patterns or try Margo's Beadie Critters to find more.

Here is the same beaded lizard pattern made with size 6 E beads and one made with Perler beads.